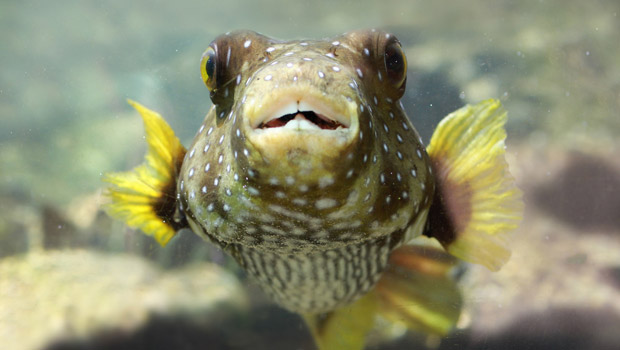 The pufferfishes, also known as blowfishes or balloonfishes, actually include two families of closely-related fishes: the smooth pufferfishes and sharp-nose puffers (Family Tetraodontidae); and the spiny pufferfishes (Family Diodontidae). Pufferfishes are all named for their ability to inflate their bodies as a defense. When threatened, pufferfishes swallow water to fill their expandable stomachs. Since their ribs are quite short and do not form a cage around the stomach, the entire body increases in diameter two to three times as the stomach swells, making these fish too large or unwieldy for most predators to handle. When the threat is past, the water is expelled and the fish returns to its original size. In addition, many pufferfishes also have chemical defenses; their skin produces a potent toxin that may also deter predators. These fish are considered a delicacy in Japan where they are called “fugu”. While the flesh itself is not poisonous, the fish must be prepared by an expert chef so that toxins stored in the skin and internal organs do not contaminate the meat, making it fatal to the gourmet.

The smooth pufferfishes (Family Tetraodontidae) have short, rounded bodies. Their skin lacks scales, but may be covered with short, prickly bumps. Two teeth in each jaw are fused, forming a beak-like structure that is used to scrape or crush prey like corals, sea squirts, sea urchins, brittlestars, and other bottom-dwelling invertebrates. They hunt close to the reef during the day and rest in caves or crevices at night. One of the most common smooth puffers in Hawai’i is the spotted puffer (Arothon meleagris) which can reach 20 inches (51 cm) in length. It is found through the Pacific and Indian Ocean, from Hawai’i to the tropical coast of East Africa.

Within the smooth pufferfish family is a group of smaller species with more angular bodies. These sharpnose pufferfishes or tobies are fairly common in quiet, shallow waters of the reef where they are active by day, feeding on algae, sponges, sea squirts, worms and organic debris. Like their larger relatives, they have fused teeth which are used to scrape or crush their food. They are distinguished from other puffers by their narrower bodies, longer snout, and somewhat rigid back. They swim using the dorsal and anal fins in a sculling movement, but can dart quickly into cover with a flick of the tail. The Hawaiian white-spotted toby (Canthigaster jactator), which reaches a size of about 3 inches (7.6 cm), is very common in Hawai’i, but is found nowhere else in the world.

Spiny pufferfishes or porcupine fishes, named for the strong, sharp spines that cover the body surface, belong to the Family Diodontidae. The spines are actually modified scales and lay flat against the body most of the time. When the fish is alarmed and inflates with water, the spines stand erect on the nearly spherical body. This formidable defense deters nearly all predators. In Hawai’i, only large tiger sharks are know to eat full grown pufferfish. Spiny pufferfish are found close to the reef in quiet waters. Resting by day, often in caves or under ledges, these puffers emerge at night to feed. Their large eyes help them locate prey in the dark. Two heavy plates in their mouth are used to crush hard-shelled prey like snails, hermit crabs, and sea urchins. Both species of spiny pufferfishes found in Hawaii (Diodon hystrix and Diodon holocanthus) are found world-wide in tropical waters and can reach sizes of one to two feet (30-61 cm).

Distribution
worldwide in tropical & temperate waters, including marine and some freshwater habitats