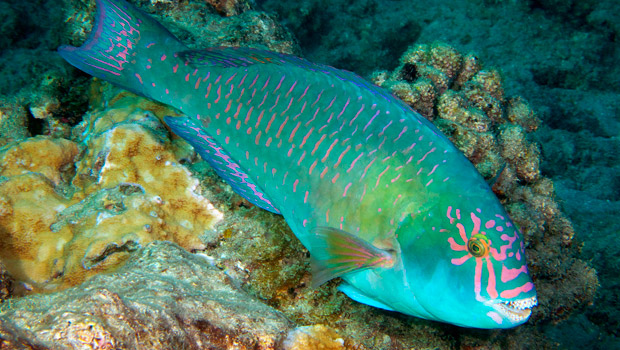 Parrotfishes, called uhu in Hawaiian, inhabit shallow, tropical seas around the world. They are easily recognized by their parrot-like beak of fused teeth, a bluntly-rounded head, large scales, and brilliant colors. Like their relatives, the wrasses, parrotfishes have a single continuous dorsal fin and swim with lazy rowing motions of their pectoral (side) fins. Most range in size from less than 12 inches (30 cm) to nearly three feet (90 cm) in length. Some South Pacific species can reach lengths of over six feet (1.8 m).

Parrotfishes travel alone or in mixed groups close to the reef. They are primarily herbivores, grazing on the fine seaweeds that grow on rock or dead coral surfaces. A few species, like the spectacled parrotfish, may also feed in part on living coral. The grooves that parrotfishes often leave on rocks or coral indicate that as they scrape the rocks for food, they also remove the underlying rock or coral skeleton as well. A pair of hard, grinding plates in the throat (pharyngeal teeth) crushes the rock into a fine powder, and after it passes through the digestive tract, it is eliminated as sand. Parrotfish are thus important reef eroders and more important in the production of sand than any other group of animals in tropical seas. It has been estimated that a large parrotfish may produce as much as a ton of sand a year!

Parrotfishes are diurnal, active by day. At night, they seek shelter among the rocks and coral of the reef. Smaller individuals secrete a cocoon of mucus that encloses the body. Some scientists have suggested that the cocoon may provide sensory defense, masking or containing the parrotfish’s scent so that night-active predators cannot sense it. Other researchers propose that the cocoon keeps small night-active predators off the fish’s body, acting as a mosquito net for marine parasites. At night, parrotfishes are easy to approach as they sleep in their shelters, and can sometimes even be handled before they become alert enough to swim away.

Parrotfishes have been difficult to classify and name because, like the wrasses, they show different color patterns according to their age and sex. The spectacled parrotfish (Scarus perspicillatus), for example, is reddish brown as a juvenile, then develops a pale tail spot when it becomes a reproductive female. When it later changes sex to become a male, it develops brilliant blue-green color with pink markings. Males of this species reach 2 feet (61 cm) in length. The spectacled parrotfish, or uhu-uliuli, has been reported from Hawai’i and Johnston Island (to the south).

Uhu were a favorite fish of early Hawaiians and there are Hawaiian names for the different sizes and color forms of the parrotfishes. Their prominence on Hawaiian reefs is reflected by the many Hawaiian legends about them.