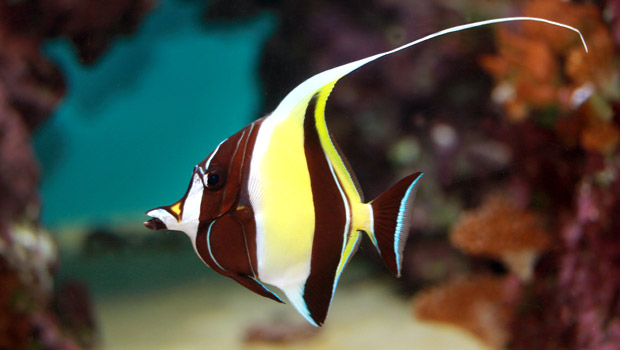 To many ocean lovers, the Moorish idol is a quintessential reef fish. This distinctive species is widely distributed in the Indo-Pacific and tropical eastern Pacific, from East Africa to Pacific coasts of the tropical Americas. And, while the Moorish idol is highly recognizable… it sometimes suffers from a case of mistaken identity. Let’s see if we can clarify.

The Moorish idol is common in Hawai’i and occurs from shallow to relatively deep (to 600 feet, 180 m) water. Snorkelers and divers see it often on the reef, as it swims alone or in groups of four to six individuals. Shore-based reef watchers see it also – its striking colors showing through the surface as the fish forages in rocky shallows and even boat harbors.

The distinctive color pattern includes an orange saddle on the upper jaw, alternating black and yellow bars on the high oval body, an elongated white dorsal fin, and black tail. The Hawaiian name, kihikihi, meaning “curves”, “corners,” angular”, and “zigzag”, may refer to shape as well as color pattern. These dramatic markings may also be protective for the fish by creating mistaken identity. The bars of color may serve as “disruptive coloration” that breaks up the body outline and makes it harder for predators to tell where the fish begins and ends. Some researchers suggest that the long, white dorsal fin may also serve to increase the fish’s apparent size, so that it looks larger to potential predators.

Predators aren’t the only creatures confused by the Moorish idol’s colors and shape… humans are too, sometimes. The Moorish idol looks a lot like the similarly-shaped and patterned banner butterflyfish. To tell them apart, watch where these different fishes spend their time and look for color differences on the head and tail. The Moorish idol, with orange on the jaw and a black tail, is usually found near the seafloor and reef.Â  The banner butterflyfish, with a white jaw and yellow tail, is found higher in the water column, feeding on plankton. And, while the shape of the Moorish idol reminds folks of the familiar freshwater “angelfish” they have in their home aquarium, the two are not related.

So, what is the Moorish idol’s true identity? The Moorish idol, Zanclus cornutus, is unique — the only member of the Family Zanclidae. This family name, from the Greek “zanclon”, refers to the sickle-shape of the extended dorsal fin. Moorish idols are actually most closely related to the surgeonfishes, sharing similar teeth, scales, and swimming style (using primarily the pectoral fins), but lacking the tangs’ characteristic “scalpel”. In shape, behavior and diet, through, the Moorish idol more closely resembles butterflyfishes. Omnivorous, the idol feeds mostly on animal material, like sponges, and extracts prey from crevices with a slightly elongated jaw. The diet makes this species difficult to maintain, but Aquarium Live Exhibits staff find that younger individuals can be trained over to the gelatin food we prepare.