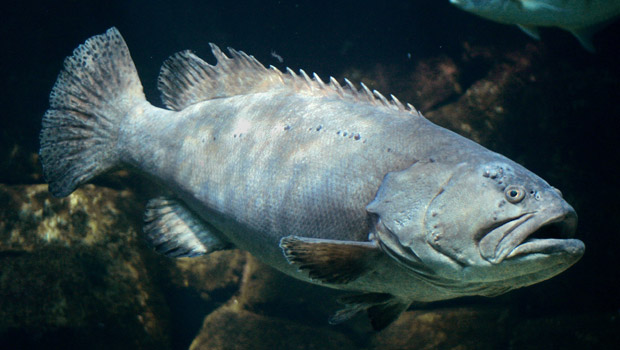 The giant grouper (Epinephelus lanceolatus) is one of the largest reef-dwelling fish. It may grow to more than 9.8 feet long (300 cm) and reach weights of over 800 pounds (>400 kg). Found on reefs throughout the Indo-Pacific, it occurs from the Red Sea to Hawai‘i, and from New South Wales (Australia) to southern Japan. It is one of only two groupers native to Hawai‘i and is exceedingly rare here.

A solitary inhabitant of lagoon and seaward reefs, the giant grouper ranges from depths of a few feet to at least 150 feet (45 m). Large individuals may have a “home site” they frequent. The giant grouper patrols slowly or rests quietly close to the bottom. Its mottled coloration blends with the surroundings, providing good camouflage for this large-mouthed ambush hunter. Its diet includes spiny lobsters and other large crustaceans, reef fishes, small sea turtles, and small sharks – all are swallowed whole.

When the Aquarium’s resident grouper arrived from Australia in July 1998, it was about two feet (60 cm) long and weighed roughly 10 pounds (4.5 kg). It rapidly outgrew the 300-gallon exhibit Gallery and was moved into the Hunters on the Reef exhibit in 1999, where it continues to grow in length and girth. A second giant grouper was added in 2004.

This grouper’s stocky shape and brown coloration give it a nearly potato-like profile. Watch for it resting motionless on the bottom or hovering effortlessly in midwater, using only tiny fin movements to maintain its position. Since groupers are long-lived, this specimen could live for decades.

The giant grouper belongs to the Family Serranidae, a prominent group of more than 400 species showing great contrasts in size, habits, and distribution. Serranids range from the 7-foot long giant grouper to the delicate basslets and anthias that may attain only two inches (6 cm) in length. Large or small, serranids are important predators on reefs. Larger species, like the groupers, are solitary ambush predators that feed on fishes and crustaceans. Basslets are mid-sized bottom-dwellers. The colorful anthias (also called fairy basslets in some references) form aggregations above the reef, where they feed on zooplankton. While serranids are key members of the reef communities in the Caribbean and Indo-Pacific, this family is represented by only a few species in Hawai‘i.