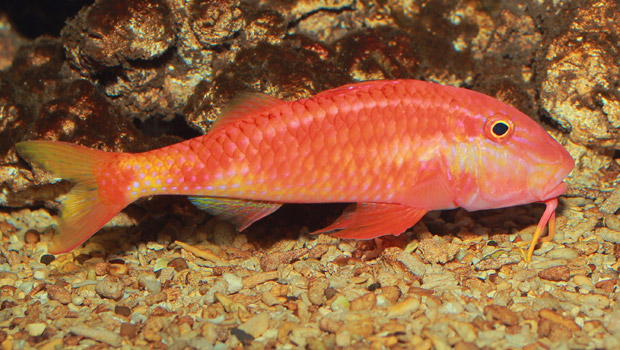 Goatfishes are named for a pair of whisker-like sensory barbels on the lower jaw, which they use to probe for food hidden in sand or in reef crevices. Sensory receptors on the barbel surfaces help the fish locate prey by both touch and taste. Males also wriggle the barbels during courtship, but when not in use, they are tucked out of sight between the lower portions of the gill covers.

Goatfishes generally have an elongate body with two widely separated dorsal fins and a soft, forked tail. They are capable of rapid color changes and a fish resting on the bottom often exhibits a different color than when it is active. There are 10 species of goatfishes native to Hawaiian reefs, but no known general Hawaiian term for all goatfish. Species with one or more stripes running the length of the body are called weke with a second word to denote the species, i.e. weke ‘ula (yellowfin goatfish or Mulloidichthys vanicolensis), weke ‘a (yellow-stripe goatfish or Mulloidichtys flavolineatus), and weke pueo (bandtail goatfish or Upeneus arge).

Goatfishes are predators. They feed on bottom-dwelling invertebrates including worms, crustaceans, small molluscs, brittle stars and heart urchins. A few species also take small fishes. When food is located, a goatfish plunges its snout into the sediment and roots for its prey, inhaling sand and prey alike. Prey are swallowed and sand is expelled via the gill cover. Some goatfish species are active primarily at night and spend daylight hours hovering in stationary schools over the reef. Others are most active by day, and some hunt by either day or night.

In Hawai‘i, all species of goatfish have long been popular as food. The manybar goatfish or moano (Parupeneus multifascatus) is recognized in a Hawaiian song for its delicious taste. The goatfish known as kūmū (whitesaddle goatfish or Parupeneus porphyreus) was highly esteemed in early Hawai‘i and was eaten broiled, cooked in ti leaves, raw or salted lightly for two or three days, then cooked. Kūmū were used as an offering to the gods when priests required a red fish. It was an appropriate offering when launching a canoe, in hula ceremonies and sometimes to atone for a sin. One meaning of the word kūmū is master. Persons who had been through a period of learning and were now “master” of an art would make an offering of a kūmū. Weke are also popular food fish, but care should be taken not to eat the head of certain species. The brain reputedly contains toxins which cause disturbed sleep, nightmares and hallucinations.

Even the 4 inch fingerlings of the weke, called ‘oama, are caught. It’s one of those “only in Hawai‘i” events: From mid to late summer, along sandy, shallow shores men, women and children of all ages stand in the water, intently gripping small bamboo or fiberglass poles. Around their feet are schools of ‘oama numbering anywhere from fifty to several thousand. The fishermen use a light line and small hooks baited with shrimp, bits of fish, aku belly, aku eggs and personal “secret” baits to entice the elusive ‘oama to take their hooks. As a local poet puts it, â€œYou look in the bucket and hope there’s enough. Some days it’s easy, but usually it’s tough. When they are caught, however, ‘oama can be fried to a tasty crispness (with or without the inner organs depending on your source). ‘Oama are also used as bait, often for papio (small jacks) that follow the ‘oama schools.

Distribution
Indo-Pacific, including Hawai‘i and the tropical eastern Pacific