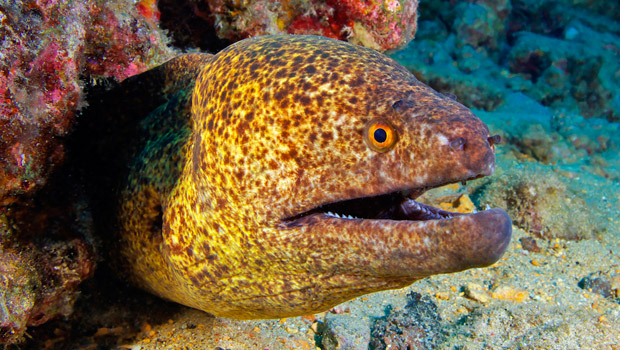 Moray eels are important predators on Hawaiian reefs. Their streamlined bodies are adapted for hunting within crevices in the reef framework. Morays of the genus Gymnothorax have large, powerful jaws and sharp, fang-like teeth for grasping and holding prey like fishes and octopus. In addition to the teeth of the upper and lower jaws, some morays also have teeth in the roof of the mouth to assure capture of their prey.

Despite their fierce appearance, most eels are not highly aggressive. They will, however, defend their shelter. For this reason, when exploring the reef, never reach into crevices and holes. Bites from the backward-curving teeth of morays cause ragged wounds and are prone to infection from the bacteria in the eel’s mouth.

The most common of the large, fish-eating moray eels in Hawai‘i is the yellow margin moray (Gymnothorax flavimarginatus), which can be recognized by its size and the yellow border around its tail. It appears especially attracted to struggling or wounded fish, and may seek out these individuals when they have sought shelter in reef crevices. This heavy-bodied eel, known in Hawaiian as puhi paka, probably represents the greatest threat to humans among the Hawaiian morays. It is known to leave the shelter of the reef, even during the day to investigate fish caught by spear fishermen.