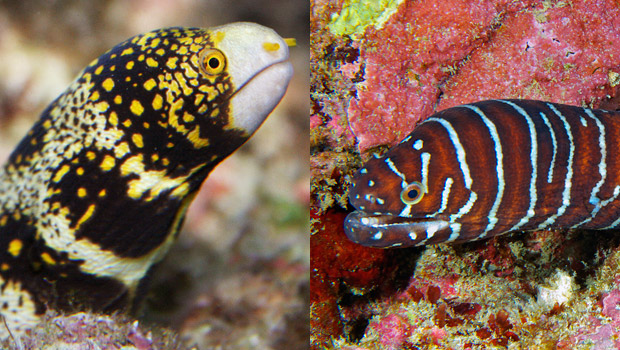 Moray eels are important predators on Hawaiian reefs. Their streamlined bodies are adapted for hunting within crevices in the reef framework. Morays of the genera Echidna and Gymnomuraena have blunt, pebble-like teeth for crushing shelled invertebrate prey like crabs and molluscs.

The snowflake moray is common from rocky shallows to depths of about 33 feet, as well as on intertidal reef flats and in tide pools. It may be seen swimming in the open, even during the day. It occurs throughout the Indo-Pacific, from East Africa to the eastern Pacific, including the coasts of the tropical Americas. Its color pattern is distinctive: it has a blunt white snout and a white body, with two rows of large starburst blotches of black that contain yellow spots â€” giving it an almost tie-dyed appearance. It is a relatively small species, reaching only about 2.3 feet. Its diet is composed primarily of crabs and it has small, blunt teeth appropriate to the task. The teeth at the front of the jaws are stout and conical, and the teeth on the sides of the jaws are small and pebble-like (molariform).

The strikingly marked zebra moray is not common, but is easily recognized: it has a blunt snout and is a deep chocolate brown with narrow light yellow bars. This species may reach sizes up to 5 feet, though most specimens are smaller. An inhabitant of crevices and ledges of reefs from the surge zone to depths of at least 130 feet, it is also seen on reef flats where it may swim in the open. This species is found throughout the Indo-Pacific, from East Africa to the tropical Americas. Well-adapted for its diet of armored invertebrates, the zebra moray’s molar-like teeth nearly cover the jaws and palate like a cobblestone pavement. Common dietary items include pebble crabs and other crustaceans, clams, even sea urchins.

Despite their sometimes fierce appearance, most eels are not highly aggressive. However, they will defend their shelter. While they are docile species and their teeth are blunt, the snowflake and zebra morays have powerful jaws that could potentially cause a vice-like bite. The backward-curving teeth of some fish-eating morays can cause much more serious wounds. For this reason, when exploring the reef, respect eels and reef dwellers and never reach into crevices and holes.

Moray eels are important predators on Hawaiian reefs and there are 38 species reported. Fish-eating moray eels are more numerous than the snowflake and zebra morays. These are generally larger in size and their large jaws contain sharp, dagger-like teeth for grasping prey like fishes and octopus. Common fish-eating moray eels include: the undulated moray (Gymnothorax undulatus), which is brown with a yellowish head; and the larger, yellowmargin moray (Gymnothorax flavimarginatus), which can be recognized by its size and the yellow border around its tail.