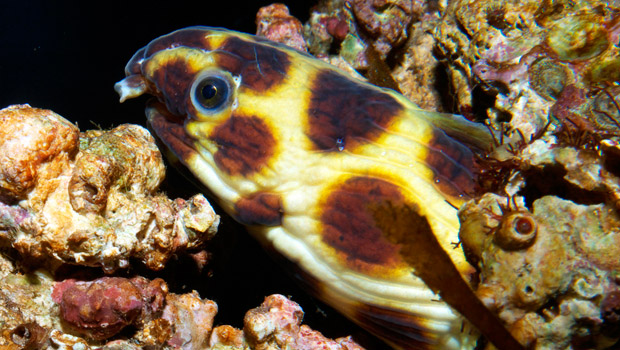 Magnificent snake eels are slender, highly modified bony fishes that may often be confused with sea snakes (which are rare in Hawai‘i). They are true fish and have gills, so they do not need to come to the surface to breathe like reptiles do. They have a long, low dorsal fin running the length of the body and they lack scales. The skin is instead smooth and slippery. These round-bodied eels typically live in burrows in sand or mud and may create the burrows by wiggling backwards into the sand with their stiff tail tip. There are many species found worldwide; about 24 are known from Hawai‘i. However, they are less frequently seen on Hawaiian reefs than the more familiar and common moray eels. The magnificent snake eel inhabits sandy areas on reef flats, as well as lagoons and seaward reefs. Their abundance cannot be truly appreciated because they generally remain well hidden within the reef.

Snake eels are well-modified to suit their life style. The head bears tube-like nostrils that point downward for hunting in or over the sand. The mouth is held open slightly as water is pumped over the gills and the gill opening is reduced to a small hole for streamlining and protection of the delicate gills. The elongated, nearly cylindrical body bears continuous dorsal and anal fins, as well as small pectoral (side) fins just behind the gill opening. Snake eels swim by moving their entire body side to side in an S-shaped wave. Using this wave pattern, a snake eel can move forward or backward, an important advantage if living within sand burrows. The tail is pointed and stiff, apparently an adaptation to burrowing backward into the sand. Snake eels remain buried in the sand most of the time, but occasionally emerge to cross sand or rubble habitats and appear to be more active at night. Because of their cryptic habits, relatively little is known about most snake eel species.