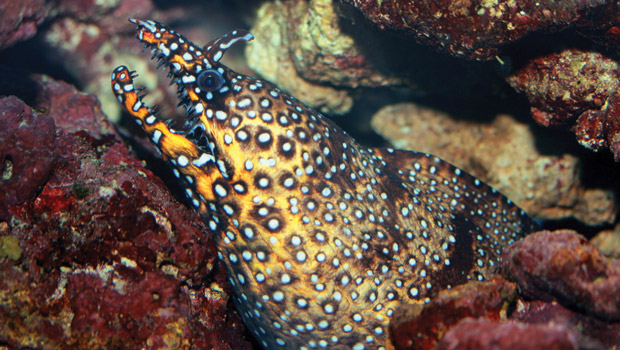 The dragon moray eel (Echelycore pardalis) is among the most striking moray eels. Its orange-brown body is dramatically patterned with spots and streaks of black and white. The curved jaws cannot completely close and are filled with fang-like canine teeth. The pointed snout bears long nostril tubes. Another set of nostril tubes just in front of the eyes look like horns. These tubular nostrils are assumed to aid in pinpointing odor sources as the eel hunts over the reef for prey. While relatively rare in Hawai‘i, this species is found throughout the Indo-Pacific.

Moray eels are important predators on Hawaiian reefs and there are close to 40 species reported. Their streamlined bodies are adapted for hunting within crevices in the reef framework; they lack pectoral fins and scales. Morays of the genera Enchelycore and Gymnothorax have large, powerful jaws and sharp, fang-like teeth for grasping and holding prey like fishes and octopus. In addition to the teeth of the upper and lower jaws, some morays also have teeth in the roof of the mouth to assure capture of their prey.

Despite their fierce appearance, most eels are not highly aggressive but they will defend their shelter. When exploring the reef, never reach into crevices and holes. Bites from the backward-curving teeth of morays cause ragged wounds and are prone to infection from the bacteria in the eel’s mouth.