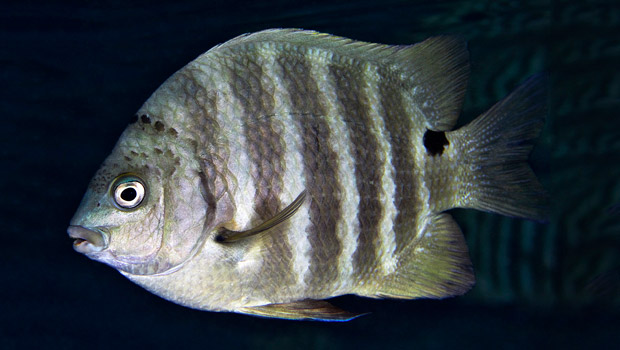 The blackspot damselfish, also known as a sergeant major, or kūpīpī in Hawaiian, is a common tidepool inhabitant as a juvenile. This damselfish is active and aggressive, and will dominate other fishes in the pool. While living in the pools, the juveniles feed on algae and small organisms from the pool surfaces, as well as on plankton that is washed into the pool with the high tide. As they grow and mature, they move from the tidepools into deeper water of the surge channels, and eventually travel onto the reef face where they can reach sizes up to nine inches (23 cm).

The adult kūpīpī, less frequently seen than the young, are among the largest Hawaiian damselfishes. They are generally solitary and highly territorial, living just outside the reef edge where they feed on algae and small bottom-dwelling marine life. They are active during daylight and are seen close to boulders and among rocky crevices. At night, they shelter under cover, alert but inactive. Adults are brownish-gray with a lighter belly, five to six vertical bands on the sides, and a prominent dark spot at the base of the tail fin. Males establish a nest site on a rock surface to which they attract females using a dramatic black & white color pattern and vigorous displays. The male remains by the nest to guard and care for the eggs.

Kūpīpī have a broad range; they are found through the Indo-Pacific from Hawai‘i to the Red Sea.