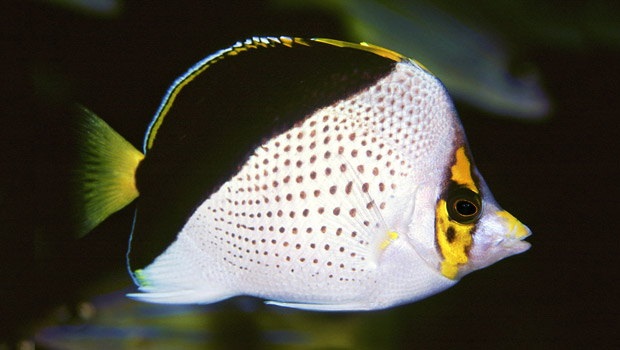 The Tinker’s butterflyfish, Chaetodon tinkeri, is one of the most distinctive butterflyfishes in Hawaiian waters, with a gold mask over the eye and dramatic diagonal blocks of black and white on the body. Named for Spencer Tinker, the Waikīkī Aquarium’s second Director, serving from 1940 to 1973. The Hawaiian name, kīkākapu, is shared with several species of butterflyfishes and suggests some sacred reference; like many butterflyfishes, it was not commonly eaten.

This species is seldom seen by snorkelers and divers. As an inhabitant of the “twilight zone” on deep reef slopes, it generally occurs at depths of 150 feet (45 m) or more. Once thought to occur only in the Hawaiian Islands, Tinker’s butterflyfish has recently been found in the Marshall Islands. Its closest relatives are also deep reef inhabitants. As new scuba diving technology allows scientists to explore deeper reef slopes, this species may be found in additional locations in the Pacific. It has a varied diet.

Butterflyfishes are perhaps the most familiar of reef fishes. To many people, these colorful fish are synonymous with coral reefs — active and brilliantly colored. Most butterflyfishes are found in tropical, shallow waters, around coral reefs at depths of less than 60 feet (20 m). But, some newly discovered species are restricted to deeper reef habitats, to 600 feet (200 m) or more. Roughly 123 species are currently known; 25 occur in Hawai‘i.

Flittering movements and conspicuous color patterns reminiscent of butterflies may have earned this group their name. Researchers propose several possible functions for the dramatic colors and patterns of primarily yellow, black and white. For many butterflyfishes, especially closely-related species sharing similar habitat, species recognition may be important when identifying a mate. Some species live in pairs and defend a territory — their “poster coloration” may make them more conspicuous to intruders. For others, the coloration may confer some degree of protection from predators. The black mask at the head of most butterflyfishes conceals the eye and the black marking near the tail may be a “false eyespot”. Predators that mistakenly strike at the tail, rather than the head, may lose their prey. Butterflyfishes are principally day active, and seek shelter close to the reef at night. Many species assume a nocturnal color pattern that is duller than their day-time colors; others, possibly pair-bonded or territorial species, have dramatic black/white contrast markings at night. In comparison, the Tinker’s butterflyfish has a golden mask over the eye, and contrasting white and black diagonal blocks on the body. Night-time observations made at the Waikīkī Aquarium indicate a color change that includes the development of gray blotches on top of the normal pattern.