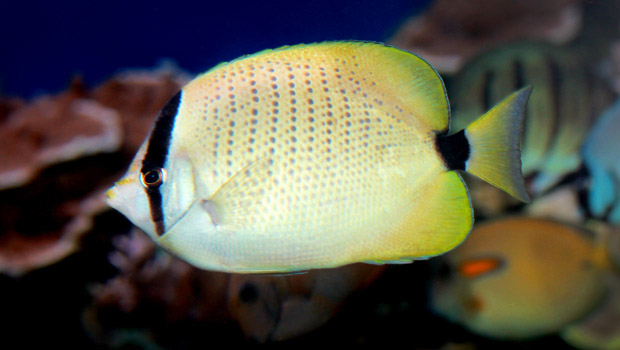 This species is a Hawaiian endemic, it is found only in the Hawaiian Islands and is the most common species of butterflyfish in Hawaiian waters. It feeds primarily on zooplankton above the reef, but sometimes cleans other fishes and is also opportunistic, feeding on nests of damselfish eggs if they are unprotected. Familiar to snorkelers and divers, it is seen in schools above shallow reef slopes, as well as to depths of 830 feet (250 meters). The milletseed butterflyfish reaches lengths of 6.5 inches (16.5 cm).

Butterflyfishes are perhaps the most familiar of reef fishes. To many people, these colorful fish are synonymous with coral reefs — active and brilliantly colored. Most butterflyfishes are found in tropical, shallow waters, around coral reefs at depths of less than 60 feet (18 m). But, some newly-discovered species are restricted to deeper reef habitats, to 600 feet (180 m) or more. Roughly 116 species are currently known; 123 occur in Hawai’i. Aquarium exhibits feature more than a dozen species from Hawai’i and the Western Pacific, including both common and rare varieties.