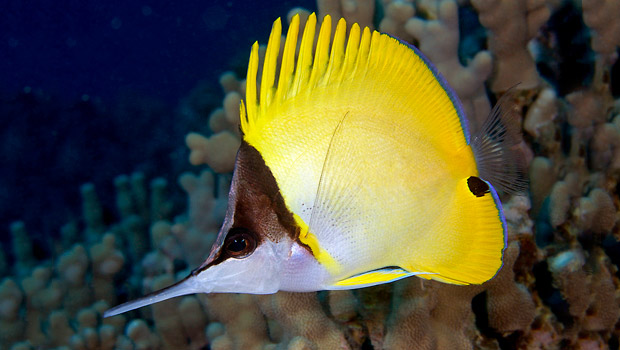 The longnose butterflyfish, Forcipiger longirostris, or lau-wiliwili-nukunuku‘oi‘oi in Hawaiian, is named in three languages for its distinctive elongated jaw. The descriptive Hawaiian name also relates the similarities between the color and movements of the fish and the yellow dropping leaves of the wiliwili tree; as the name translates “the leaf of the wiliwili tree with a sharp snout.”

On the Kona coast of the Big Island, snorkelers and divers may observe a dark color morph of the longnose butterflyfish. The all-over black or brown coloration may not be permanent; the fish can apparently gradually change from the normal yellow color to its dark morph, and possibly back again. This has complicated attempts to exhibit the dark morph, because once in captivity they change to the normal yellow color scheme. The function of the dark morph is unknown. Some researchers suggest that the black morph might be better camouflaged around the dark basalt rocks of the Big Island’s coasts, but there has been no experimental evidence to support this hypothesis.

The longnose butterflyfish also bears the distinction of being the first Hawaiian marine organism to be collected and named by European scientists. It was the first fish described from the Hawaiian Islands after it was collected on Capt. James Cook’s third voyage in the “Resolution” (1776-1780). The Waikīkī Aquarium adopted the longnose butterflyfish as its logo, since it represents a meeting and common interest in the marine environment by both Hawaiian and European naturalists.