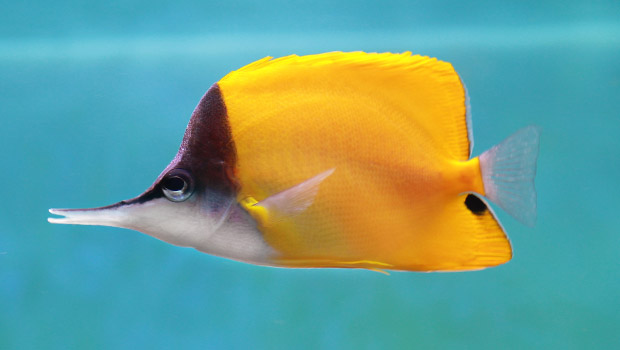 The forceps butterflyfish, Forcipiger flavissimus, or lau-wiliwili-nukunuku-‘oi-‘oi in Hawaiian, is named in three languages for its elongated, forceps-like jaw. The Latin forcipiger translates as forceps-bearing, and the Hawaiian nukunuku-‘oi’oi refers to the very sharp snout. The yellow color is also noted in both names: flavissimus means yellow in Latin; and the descriptive Hawaiian name relates the similarities between the color and movements of the fish and the yellow dropping leaves of the wiliwili tree.

Both longnose butterflyfish species probe coral branches and reef crevices for small invertebrate prey, but details of their jaw anatomy, mouth design and teeth indicate different feeding methods. The longnose butterflyfish’s mouth is designed for plucking and it takes its small prey, largely crustaceans, whole. The forceps butterflyfish, in contrast, has a mouth that opens more widely as it tears off pieces of larger prey, like the tentacles of worms and tube feet of sea urchins, as well as plucking small crustaceans and fish eggs.

The forceps butterflyfish is found throughout the Hawaiian Chain, as well as elsewhere in the Indo-Pacific and eastern Pacific regions. It is more common at shallower depths. The longnose butterflyfish has an Indo-Pacific distribution, but in Hawai’i is largely limited to the southern end of the Hawaiian Island chain, and is seen more commonly around the Big Island or Maui. It is usually seen in the deeper waters on the outer side of the reef.