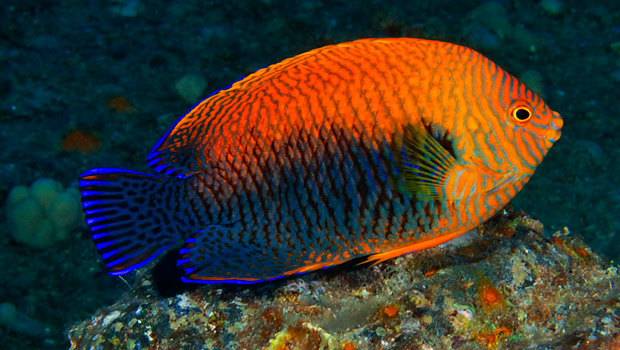 This small fish, a species unique to Hawai‘i, is the only common angelfish found on Hawaiian reefs. Abundant in coral-rich surroundings, this colorful orange and blue fish was named for the first director of the Waikīkī Aquarium, Frederick Potter. An individual Potter’s angelfish limits its movements to a well-defined area close to the shelter of finger coral branches, usually at depths of at least 15 feet (4.5 m). Active by day, it feeds on algae and detritus on dead coral surfaces. At night, it remains alert but inactive, protected within the coral.

Among angelfishes, a sex reversal from female to male can be part of the life history. Most small individuals are female and larger, more colorful individuals are male. Larger, brighter males are usually accompanied by smaller, drabber females, forming a harem. A dominant female Potter’s angelfish changes sex to become the harem master if the male is removed.

Like other angelfishes, this species is recognized by a heavy, curved spine on its “cheek” near the edge of the gill cover. Its slender, disc-shaped body is well-suited to life on a coral reef, for it can dart in and out of crevices while searching for food or seeking shelter. Angelfishes are very dependent upon the protection of coral caves and crevices, and are rarely seen over sandy stretches or other areas that offer little cover. They are often territorial and spend most of their time near the bottom in search of food. They have small mouths and many flexible, comb-like teeth used for plucking or scraping food from the rocks. The Potter’s angelfish belongs to a group called “pygmy” angelfishes. Smaller than other members of the angelfish Family Pomacanthidae, pygmy angelfishes feed on algae rather than on sponges or other invertebrates like other members of the family.