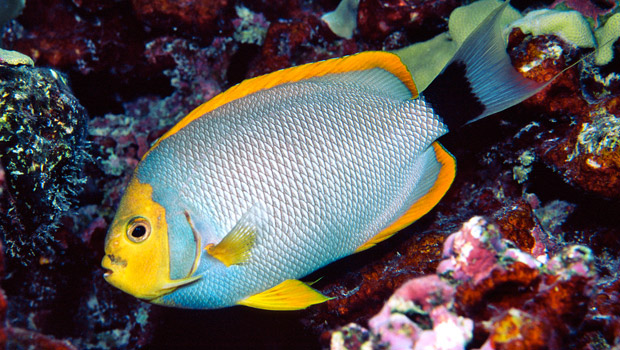 This stunning ivory, black and orange angelfish was first scientifically described in l975 and is known only from the Hawaiian Islands. It is extremely rare around the main islands of the archipelago, where few individuals are seen except in deeper water of over 200 feet (60 m). It is more common at Midway and Kure atolls in the Northwestern Hawaiian Island where it occurs in shallower water (60 to 90 feet/ 18 to 27 m) above submerged banks with sparse coral cover. The extensive reef habitat in the NWHI and cooler water temperatures appear to provide more suitable habitat for this species.

Like other angelfishes, the masked angelfish is recognized by a heavy, curved spine on its “cheek” near the edge of the gill cover. Its slender, disc-shaped body is well-suited to life on a coral reef, for it can dart in and out of crevices if seeking shelter. Angelfishes are very dependent upon the shelter of boulders or coral caves and crevices, and are rarely seen over sandy stretches or other areas that offer little cover. They are often territorial and spend most of their time near the bottom in search of food. Angelfishes have small mouths and many flexible comb-like teeth with which they pluck or scrape their food from the rocks. Most species feed on algae, on invertebrates like sponges, coral, sea squirts, and worms, or on organic matter that has accumulated on the bottom. In contrast, the masked angelfish feeds principally on zooplankton, foraged in open water above reef drop offs.

Male and female masked angelfishes display different color patterns. The female is ivory colored with a black mask across the eyes and black at the base of the tail. Females are capable of sex reversal as they grow older. Individuals that change sex to become males develop the male color pattern with a pale yellow face mask and bright orange fins.