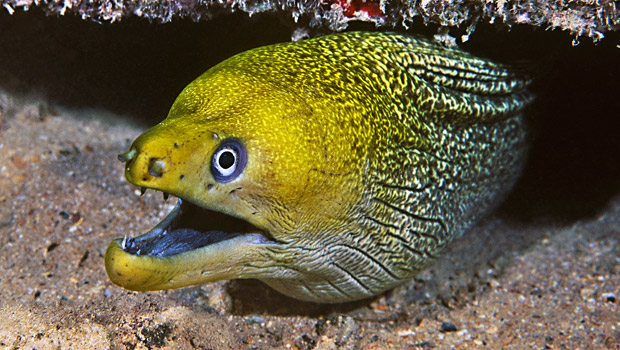 This moray is common on Hawaiian reefs, and can be seen withdrawn in crevices by day or hunting in the open at night. It is recognized by its yellowish head and the body is marked with irregular brown blotches rimmed by white or yellowish borders that form a pattern something like a chain-link fence. This species is reported to bite more often than most morays.

Moray eels (Family Muraenidae) make up one of the largest families of bony fishes in Hawai’i, with more species (over 40) than any other fish family than perhaps the wrasses (Family Labridae). Their abundance cannot be truly appreciated because most species are small and remain well hidden within the reef. Research has show that the smaller eel species represent a large percentage of the fish population on Hawaiian reefs.

Moray eels are true bony fishes with bodies highly modified to suit their life style. The elongate head bears a large, gaping mouth and tube-like nostrils. The mouth is held open so that water can be pumped over the gills. The gill cover is reduced to a small hole for streamlining and protection of the delicate gills. The elongated muscular body of the eel lacks paired fins (pectoral and pelvic fins) seen in other fishes, allowing the eels to move more easily within the narrow crevices of the reef framework. The dorsal (top), anal (bottom), and caudal (tail) fins remain as fleshy ridges, covered with thickened skin to protect them from abrasion. Lacking paired fins, eels swim by moving their entire body side to side in a S-shaped wave. Using this wave pattern an eel can move forward or backward, an important advantage if living within the narrow holes of the reef. The scales have either been lost completely or are buried within the skin.

Morays lurk in holes and crevices in rocky areas or on the coral reef. During the day, often only the head is visible at the entrance to its shelter, but most eels are never seen. They usually emerge at night to search within and over the reef for prey which they locate using a keen sense of smell. They often prey on inactive diurnal species that are resting within the reef framework at night.

There are two major groups of moray eels in Hawai‘i, differentiated by the kind of prey they are adapted to take. This species and other eels that feed on fishes and soft-bodied invertebrates like octopus have elongated heads and long, fang-like teeth for grasping their soft-bodied prey. Their teeth curve backward so that once captured, prey cannot escape and can be moved more easily backward for swallowing. Eels that feed on hard-shelled prey like crabs and molluscs have blunt snouts and pebble-like teeth for crushing their prey.

Most Hawaiian morays are not more than two feet (61 cm) long, but a few species may reach six feet (1.8 m) in length. While armed with formidable teeth, most moray eels are not usually aggressive and will not attack prey larger than themselves. When approached by a swimmer or diver, most eels either disappear into their shelter, or open the mouth wide in a defensive posture toward the intruder. While unprovoked attacks on divers have been reported, most eel bites occur when divers place hands or feet too close to the eel’s shelter area.

Distribution
Indo-Pacific, from East Africa to the tropical eastern Pacific, including Hawai‘i