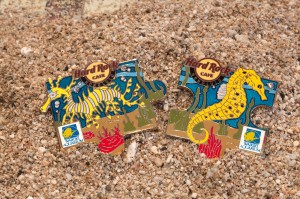 â€œWe are happy to support the Waikiki Aquarium in its mission to inspire and promote the understanding, appreciation and conservation of Pacific marine life,â€ said Jill Gilboy, senior sales & marketing manager at Hard Rock Cafe. â€œThe Hard Rock Cafeâ€™s values truly align with those of the Aquariumâ€™s, and this seahorse pin is just one example of how we can increase awareness about conserving Hawaiâ€˜iâ€™s ocean resources.â€

Over the years, Hard Rock Cafe has partnered with the Aquarium on a multitude of initiatives. Support has ranged from the recent â€œRock Out with Friends of the Waikiki Aquariumâ€ event held on Oct. 17 to numerous beach clean ups, teacher workshops and other sustainability initiatives.

About the Waikiki Aquarium
Founded in 1904 and administered by the University of Hawaii at Manoa since 1919, the Waikiki Aquarium is located on the shoreline of Waikiki Beach next to a living reef and across from Kapiolani Park. The Aquarium â€“ second oldest in the U.S. â€“ showcases more than 500 marine species, and maintains more than 3,500 marine specimens. Public exhibits, education programs and research focus on the unique aquatic life of Hawaii and the tropical Pacific. The Aquarium welcomes more than 320,000 visitors annually, and is open daily from 9 a.m. to 4:30 p.m. except Honolulu Marathon Sunday and Christmas Day. Admission is $12 for visitors; $8 for local residents and active duty military with ID, $5 for senior citizens and juniors ages four to 12; and free for children three and under and Friends of Waikiki Aquarium (FOWA) members. For more information about the Waikiki Aquarium, including membership, call (808) 923-9741 or visit www.waikikiaquarium.org.

About Hard Rock International
With a total of 171 venues in 54 countries, including 134 cafes, 18 hotels and 7 casinos, Hard Rock International (HRI) is one of the most globally recognized companies. Beginning with an Eric Clapton guitar, Hard Rock owns the world’s greatest collection of music memorabilia, which is displayed at its locations around the globe. Hard Rock is also known for its collectible fashion and music-related merchandise, Hard Rock Live performance venues and an award-winning website. HRI owns the global trademark for all Hard Rock brands. The company owns, operates and franchises Cafes in iconic cities including London, New York, San Francisco, Sydney and Dubai. HRI also owns, licenses and/or manages hotel/casino properties worldwide. Destinations include the companyâ€™s two most successful Hotel and Casino properties in Tampa and Hollywood, Fl., both owned and operated by HRI parent company The Seminole Tribe of Florida., as well as other exciting locations including Bali, Biloxi, Chicago, Cancun, Las Vegas, Palm Springs, San Diego and Singapore. Upcoming new Hard Rock Cafe locations include Johannesburg, Chennai, Istanbul and Tenerife. New Hard Rock Hotel projects include Daytona Beach, Aruba, Riviera Maya, Abu Dhabi and Shenzhen and Haikou in China. New Hard Rock Casino projects in development include Hungary and Northfield, OH. For more information on Hard Rock International, visit www.hardrock.com.