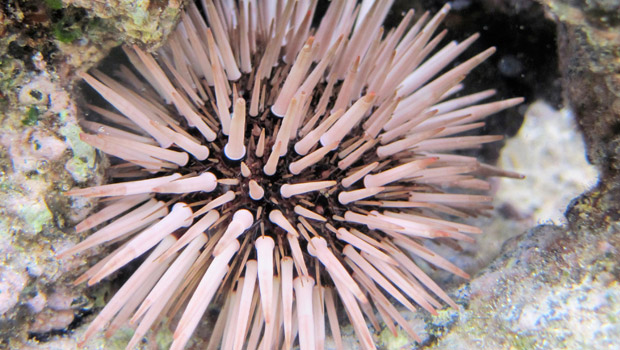 Rock-boring sea urchins are found in tidepools, on exposed reef flats, and in rocks within the wave swept surge zone. Their protection from wave impact is to live in holes in rocks where they are sheltered from the full force of the waves. Hard spines and scraping jaws are used to enlarge natural holes in the rock as the urchins grow. These urchins graze on algal film that grows on the rocks and on bits of seaweed that is washed into their shelters. Food trapped on the spines is transferred by long, sucker-tipped tube feet to the mouth on the underside.

Echinometra mathaei is the most common shallow water urchin in Hawai‘i. It reaches diameters up to 2½ inches (6 cm) across. Its colors range from greenish-gray to tan and sometimes pink. It has multiple Hawaiian names. ‘Ina is for all rock-boring sea urchins, with the pinkish ones being called ‘ina ula and the whitish ‘ina kea. A closely related species, Echinometra oblonga, is dark purple to black, and is called ‘ina ʻeleʻele in Hawaiian (in reference to its blackish color). These urchins’ spines are typically shorter, thicker and blunter than those of the lighter species. Both species often occur together in tidepools, on rocky benches, and on shallow reef flats and coralline algal crests.

Sea urchins belong to the animal grouping, or Phylum, called the Echinoderms, the “spiny-skinned” animals. Their relatives include the seastars, brittlestars, crinoids (featherstars) and sea cucumbers. Echinoderms all share basic similarities in their habits and body design: they are all totally marine; all bottom-dwelling (benthic); are unique in the animal kingdom in having a five-part body symmetry; and a water-vascular system of muscular internal canals which provides hydraulic power for tube feet that are used in movement, attachment, feeding, and often gas exchange. Their large internal body cavity is also fluid filled, and circulating fluids carry gases and nutrients throughout the body. Echinoderms have an internal skeleton of calcite, a form of calcium carbonate. Their skeletal plates, called ossicles, are developed to different extents in the different groups. In many echinoderms, like the sea urchins, extensions of the skeleton form the spines for which this group is named.

Looking past their spines, sea urchins have a circular to oval shape. But their basic five-part symmetry is evident in the five zones of tube feet, alternating with five zones of spines, which run from the mouth on the urchin’s underside to the top of the body. In urchins, the skeletal ossicles are flattened plates, fused into a rigid test (skeleton). The spines sit on knobs on the test, attached by skin and muscles; the water-filled tube feet extend from inside the test out through holes in the plates. The many, muscular tube feet are used for attaching to the seafloor, for moving, and sometimes food capture. The urchins’ moveable spines are important in defense, movement, and food capture.