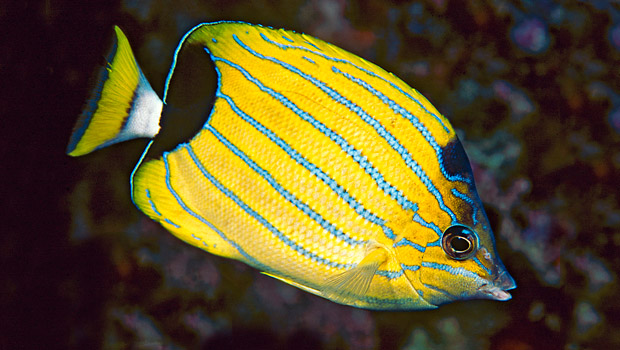 The delicate bluestripe butterflyfish is a Hawaiian endemic – species found only in the Hawaiian Islands. The coloration of this species is distinctive among Hawaiian butterflyfishes: 8 blue stripes run diagonally from head to tail; and there is no black vertical bar that masks the eye as in many other species. A black spot high on the head and another at the base of the tail may represent deceptive coloration by confusing the location of the eye. Single individuals are common on shallow reef and rocky shores, especially around the patches of sand or smooth bottom between boulders or coral. This day active species feeds on reef invertebrates, in particular the tentacles of tubeworms, as well as algae.

Butterflyfishes are perhaps the most recognizable of reef fishes. To many people, these colorful fish are synonymous with coral reefs — active and brilliantly colored. Most butterflyfishes are found in tropical, shallow waters, around coral reefs at depths of less than 60 feet (20 m). But, some newly-discovered species are restricted to deeper reef habitats, to 600 feet (200 m) or more. Roughly 123 species are currently known; 25 occur in Hawai‘i. Aquarium exhibits feature more than a dozen species from Hawai‘i and the Western Pacific, including both common and rare varieties.

Flittering movements and conspicuous color patterns reminiscent of butterflies may have earned this group their name. Researchers propose several possible functions for the dramatic colors and patterns of primarily yellow, black and white. For many butterflyfishes, especially closely-related species sharing similar habitat, species recognition may be important when identifying a mate. Some species live in pairs and defend a territory — their “poster coloration” may make them more conspicuous to intruders. For others, the coloration may confer some degree of protection from predators. The black mask at the head conceals the eye and the black marking near the tail may be a “false eyespot”. Predators that mistakenly strike at the tail rather than the head may lose their prey. Butterflyfishes are principally day active, and seek shelter close to the reef at night. Many species assume a nocturnal color pattern that is duller than their day-time colors; others, possibly pair-bonded or territorial species, have dramatic black/white contrast markings at night.

Ichthyologists classify butterflyfishes in the Family Chaetodontidae, named for their tooth design. All have comb-like teeth and are primarily carnivores, but diet varies from species to species. Some reef-associated species have a broad diet and prey on different kinds of soft-bodied invertebrates. Corallivores have a specialized diet of coral polyps or mucus, and these species often maintain territories. A few are planktivores, feeding above the reef and plucking individual planktonic animals from the water column.

Size
to 6 inches in length