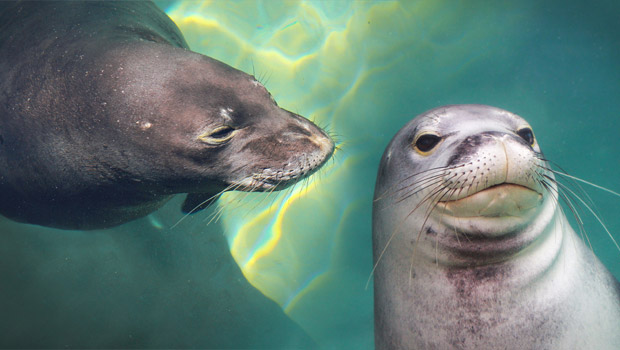 Hawaiian monk seals are both endemic and endangered

The Hawaiian monk seal is a critically endangered species, with the recently completed 2015 population census by NOAA indicating about 1,272 seals across the main Hawaiian archipelago. They are protected by both Federal and State laws.

Hawaiian monk seals naturally spend about a third of their time resting and sleeping on shore. They are not “lazy,” but conserve energy between their hunting and foraging trips. They are known to feed on reef fish, octopus, and lobster, as well as other types of prey. When they are hunting on the reef, they may stay underwater for more than 15 to 20 minutes, depending on how deep they dive and how active they are underwater. Monk seals have been known to dive to about 1,650 feet (500 m), but most of their diving is probably much shallower. Large tiger and Galapagos sharks are their main natural predators, and the presence of sharks may be another possible reason for the seals to minimize their time in the water (and maximize their time on the beach). Monk seals are not social seals and do not form harems or other large groups seen in some seal and sea lion species. The name monk seal may come from their solitary nature.

Females give birth for the first time at five to nine years of age. Seal pups are usually born in the spring. They nurse for 5 to 6 weeks and can quadruple their birth weight of 35 pounds (16 kg). After weaning, pups live off their fat while they learn to forage for themselves. Some research and recovery projects aim to assure pup and juvenile survival in the wild.

The Hawaiian monk seal is a pinniped, a member of the group of marine mammals that includes the seals, sea lions, fur seals, and walruses. The monk seal is a “true seal” and differs from seal lions (eared seals) in several significant ways:

Monk seals at the Waikīkī Aquarium

The two Hawaiian monk seals at the Waikīkī Aquarium are here under special permit from the National Marine Fisheries Service. While residing at the Aquarium, the monk seals are part of a biological research program. The research is not intrusive or harmful to the seals, but allows us to make observations and learn more about their biology and life history so that we can work to increase their numbers in the wild.

Both seals are male. Their diet here at the Aquarium consists mainly of restaurant quality fish and squid supplemented with vitamins.

Our resident seals are probably not “lonely,” but would spend much of their time alone or away from other monk seals. Males may actually be very aggressive towards one another and towards females and pups, so even in their natural habitat, monk seals tend to spread out on available beaches.

Called Maka for short, he was brought from French Frigate Shoals in the summer of l984. He was only three weeks old and weighed only 60 pounds. He had been weaned early, abandoned or orphaned, and probably would not have survived if he had not been brought to the Aquarium and given special care. Now an adult he is about 7 feet (2.2 m) long and weighs between 350 and 390 pounds (159-177 kg).

Abandoned by his mother soon after his birth on Kaua‘i in May 2008, Ho‘ailona was rescued and cared for by NOAA scientists. He was released to the wild, and 6 months later, he began interacting with humans instead of other seals. He was once again removed from the wild with the intention of relocation to the remote island of Nihoa. But during a medical check-up veterinarians discovered that he developed cataracts in both eyes, and it was determined he couldn’t be re-released to the wild. In Fall 2011, when he was three years old and weighed 220 lbs (100 kg), he was brought back to Hawai‘i and is now on exhibit at the Waikīkī Aquarium. Though he is mostly blind, he has adapted to his pool and swims quickly through his cave and responds to stimuli.

YOU CAN HELP, TOO!