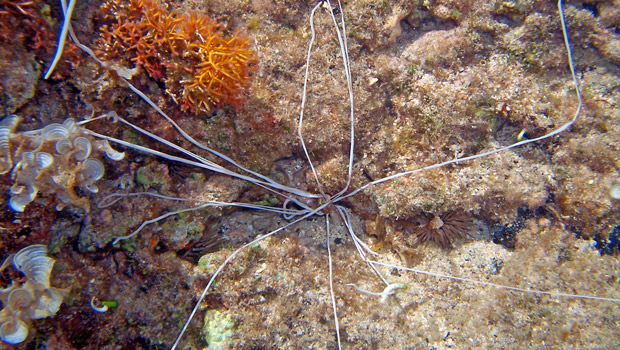 The spaghetti worm is a segmented worm, a marine relative of the earthworm and a member of the Phylum Annelida. Like other segmented worms, a spaghetti worm has a long, cylindrical body that is divided into many similar sections called segments. Some structures, like muscles, kidneys, and nerves are repeated in each segment. The spaghetti worm is classified as a polychaete or bristle worm because it has small bristles called setae along the sides of its body. The setae are usually part of the parapodia, paired appendages on each body segment. In more active worms, parapodia are used for crawling; in the spaghetti worm, they are used to hold on to, and move up and down inside a tube. This worm’s segmented body is hidden within a crevice or under rocks and only the long white spaghetti-like tentacles extend from the head to gather food. Spaghetti worms do not generally leave their tube or reef crevices and are not highly mobile – they belong to the group of polychaetes called sedentary worms.

The hidden body of the worm is 5 to 6 inch long and about 1 inch thick. Within the shelter of the rocks or reef, it constructs a tube from sand and gravel which it cements together with a mucus-like secretion from a collar-shaped gland just below the tentacles. A tangle of red gill filaments is located just behind the feeding tentacles.

The tentacles (about 1/4 inch wide) extend from the head end of the worm and may spread as much as 3 feet over the reef or tide pool floor. Each elastic tentacle is grooved and, in cross-section, looks something like a rain gutter. The tentacle groove is lined with hair-like cilia that help collect and convey food to the mouth of this suspension-feeding worm. Organic particles that drop on the tentacles are carried down the groove and to the hidden mouth. Larger food particles are lassoed by the elastic tentacles and dragged to the mouth. The elastic tentacles can be withdrawn when disturbed and will regenerate if broken or eaten by predators. A large proportion of the blue-stripe butterflyfish’s diet is made up spaghetti worm tentacles.