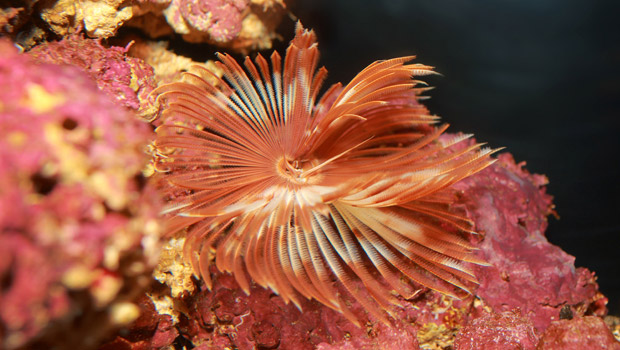 Featherduster worms are polychaetes, marine relatives of the earthworm and members of the Phylum Annelida. These segmented worms secrete a leathery tube that supports and protects the soft body. Since they do not leave the tube and not highly mobile, they are called sedentary or tube worms. Like other segmented worms, they have long, cylindrical body that is divided into many similar sections called segments. Some structures, like muscles, kidneys, and nerves are repeated in each segment. The featherduster worm is classified as a polychaete or bristle worm because it has small bristles called setae along the sides of its body. The setae are usually part of the parapodia, paired appendages on each body segment. In more active worms, parapodia are used for crawling; in the featherduster worm, they are used to hold on to, and move up and down inside the tube.

Featherduster worms, also called fan worms, are named for the highly-branched crown, or fan, of tentacles that extends from the protective tube. These tentacles extend from the head of the worm and are used in both oxygen uptake (respiration) and filter feeding. Fine side branches on the tentacles trap small particles of food drifting in the water currents. Large worms may have tentacles crowns spreading 6 inches (15 cm) across. The worms are sensitive to light, water motion and touch. They can protect the delicate tentacles from potential predators by withdrawing rapidly into the protective tube. The worm produces the tube, secreting a leathery mucus from a collar-like structure at the base of the tentacles. Particles of sand and mud that are collected in the tentacles are incorporated into the tube.

Featherduster worms are common throughout the world in shallow water. In Hawai’i, they are found on reef flats and in quiet bays and harbors, where there are hard surfaces to which they attach their tubes, as well as high concentrations of food particles in the water.