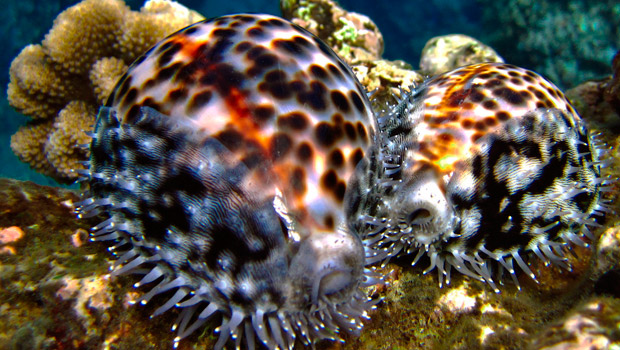 Cowry snails usually inhabit rocky and coral areas where they browse on algae, or encrusting invertebrates like sponges and bryozoans (diet varies with species). They are most active at night and conceal themselves in crevices during the day. In cowries, the spire (pointed end) of the shell is overgrown by the last whorl, resulting in a rounded, domed shape. The shell-producing mantle tissue has two special folds that extend outside the shell in the cowries. These mantle folds keep the shell clean and polished, and prevent boring or encrusting organisms from causing damage to the shell surface. The mantle is covered with frilly, branched projections called papillae. The functions of the papillae are not clear: they may provide camouflage for the animal by breaking up the snail’s outline; or may allow absorption of oxygen from the seawater.

Cowries, like other snails, have: (1) a well-developed head with eyes and tentacles, a mouth on a protractible proboscis (mouth tube); (2) a broad muscular foot for crawling; and (3) a soft body mass (containing the internal organs) which is protected by their shell.

Sexes are separate in the cowries and fertilization is internal. The female lays a cluster of white, parchment-like capsules containing the developing snail embryos. The female broods these capsules, protecting them by covering them with her foot, until the swimming veliger larvae hatch and enter the plankton where they will drift and develop.

The tiger cowry (Cypraea tigris) occurs throughout the Pacific, but reaches its largest sizes in the Hawaiian Islands (up to 6 inches/15 cm). It is a grazing herbivore, rasping algae from rocks and reef with its file-like radula. The tiger cowry’s shell color is distinctive, though it doesn’t resemble the animal for which it is named. The high, inflated shell may be white or golden brown with scattered dark brown or black spots and a golden mantle line that runs the length of the shell. The mantle tissue is light with irregular dark blotches and covered with simple, unbranched papillae.