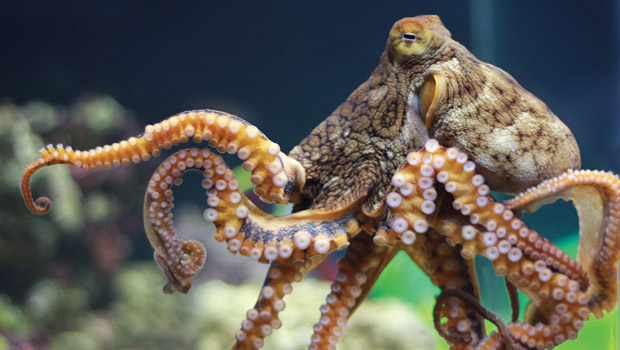 The octopus is a cephalopod mollusc, most closely related to squid, cuttlefish, and the chambered nautilus. Octopuses completely lack the shell which characterizes more distant mollusc relatives like the snails and bivalves, but they have the same basic body design: a head with eyes; muscular foot (modified into eight arms); and a sac-like body mass that encloses the internal organs and gill chamber. The body mass is covered by a muscular layer of tissue called the mantle. In molluscs that do have shells, it is the mantle tissue that produces this external skeleton. But, while the octopus lacks a shell, it is not without defenses and shows many fascinating adaptations for survival. The feature most responsible for the octopus’ success is its well-developed nervous system.

Octopuses are probably the most “intelligent” of invertebrates and have been shown to have the ability to learn from experience. The octopus relies on its extraordinary sensory systems, brain, and motor coordination in all aspects of its life. The brain, enclosed in a protective “cranium” of cartilage, interprets sensory input from the eyes and other sense organs, and controls the delicate movements of eight very active arms. Octopuses monitor their environment, detecting prey, potential predators, and other octopuses using large and well-developed eyes that can form accurate images and detect slight movements. Their highly coordinated arms are also covered with sensory receptors that help them detect crustacean or molluscan prey as they crawl over the reef.

Octopuses escape detection by both prey and predators thanks to their ability to change skin color to match their surroundings. Millions of pigment cells (chromatophores) in the skin expand or shrink when stimulated by the nervous system, creating color patterns that can be changed instantly. In addition to camouflage, the chromatophores can be activated to create patterns used in communication with other octopuses. Other tiny muscles in the skin contract or relax to change the texture of the octopus’ skin surface.

Octopuses are highly mobile predators that use their eight arms to crawl swiftly across the bottom. Short, darting movements and fast escapes are made by jet propulsion as water is inhaled into the mantle cavity (gill chamber) and then forced out through the siphon. Mollusc or crustacean prey is captured with a swift pounce and enveloped by the arms and webbing of the octopus’ body. The mouth is located on the underside of the body, in the center of the arms. As the prey is held fast by the suckers, a toxin produced by the salivary glands is injected to paralyze the prey and additional secretions containing digestive enzymes liquefy the flesh. The octopus then uses its parrot-like beak to tear the softened meat into small bites.

In the absence of a hard, protective shell, the well-developed nervous system of the octopus is an important part of its defense. Recognition of predators or rival octopus depends largely on sight and color changes in the skin may camouflage the octopus or exaggerate its size to make it appear more threatening. For fast escapes, the octopus ejects a cloud of black ink from a special gland inside the mantle cavity. The ink is held together by mucus, forming a shape to distract the predator while the octopus escapes in a different direction. If cornered, an octopus can curl its arms back over the vulnerable head and body mass, exposing only the muscular suckers and sharp beak to the predator.

In Hawai‘i, there are two common species of octopus, often called “squid” locally. The “day octopus”, called he‘e, is a small, brown and tan mottled octopus that is found on shallow reef flats and down the reef slope to depths of 150 feet (45 m). As its name implies, it is most active during the daylight hours and rests in a shelter or “den” at night. This species was and still is eaten. Also common in Hawaiian waters is the “night octopus” or he‘e-mākoko, a rusty red animal with white spots on the body and arms. As its name implies, this species is nocturnal, hunting for food at night and sheltering by day. This species was rarely eaten, but may have been used in medicine. Both octopus species feed on crustaceans (shrimp, lobsters, crabs) and molluscs (primarily cowry snails). Their dens are often recognized by the pile of broken crab and snail shells (remnants of past meals) found just outside the entrance.

Compared to the giant octopus of the Pacific Northwest, which reaches weights of 90 pounds (40.5 kg), both Hawaiian species are small, perhaps reaching a maximum arm span of two to three feet (to 0.9 m) and maximum weight of 10 pounds (4.5 kg). Hawaiian octopuses are none-the-less, a very popular food item and are sought after by local fishermen who catch them by hand or using spears. Early Hawaiians also relished octopus and captured them either by spearing or by using lures made of a large cowry shell lashed onto a hook. These fishermen were quite skilled in attracting the octopus with the movements of the lure.