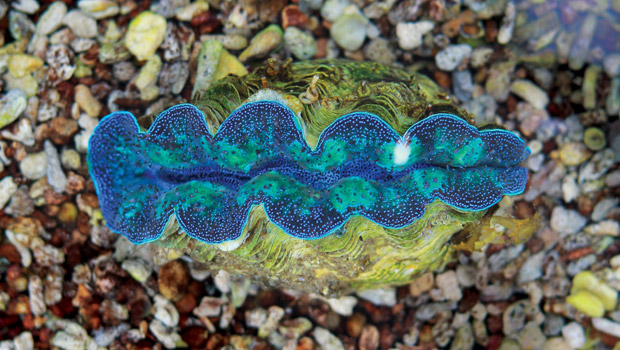 Despite their reputation as “killer clams”, these colorful bivalves do not eat fish or people! The fleshy mantle tissue, which secretes the shells, is greatly expanded and fills the upper region between the shells. This mantle tissue contains large numbers of single-celled algae called zooxanthellae that produce food through photosynthesis. Using sunlight for energy, the tiny plant cells convert carbon dioxide and other raw materials into food molecules, some of which are absorbed by the clam. As long as there is lots of sunlight, the clams require no additional food. In fact, the clams on display at the Waikīkī Aquarium have never been fed anything except sunlight! Giant clams living on the reef, like other bivalves, may also obtain nutrition by filter feeding plankton.

Giant clams are molluscs; they belong to the group that includes other bivalves, like the oysters, scallops, mussels, and other clams. More distant mollusc relatives are snails, sea slugs, octopus, squid, cuttlefish and chambered nautilus.

There are seven species of giant clams found in the tropical Western Pacific and Indian Oceans. The smallest species reaches only six inches (15 cm) in length, while the largest species, Tridacna gigas, may grow to more than 3 feet (1 m) and weigh up to 660 pounds (300 kilograms).

A giant clam is sexually mature at five years of age and may produce either eggs or sperm. During spawning, many clams release their eggs and sperm into the seawater where fertilization takes place. The microscopic larvae drift in the currents with other plankton for about 10 days. Then they settle on the reef and attach to the bottom with threads produced by a gland in the foot. Juvenile giant clams are food for fishes, octopus, crabs and predatory snails.

However, by the time they are three to four years old the shells are about 12 inches (25-30 cm) long, too large and thick to be penetrated by most predators.

Both the giant clam’s mantle tissue and the large muscle that closes the shells are edible and highly prized by people throughout the Pacific and Asia. The shells are taken for decorative purposes. As a result giant clams are heavily harvested and have become rare on many Pacific reefs.

Clams, like many molluscs, can produce pearls. An irritant such as a piece of sand or a parasite is covered by layers of nacre (mother-of-pearl), a hard substance secreted by the mantle to form a smooth interior to its shell. However, most pearls of giant clams are not commercially valuable.

Giant clams grow quickly and require no supplemental feeding. This makes them ideal for both commercial cultivation and subsistence farming. Commercial production may help to save the giant clams, which in some areas have been harvested to near extinction. Giant clam hatcheries produce young clams in seawater tanks or raceways and transplant them to nearshore reefs where they can be grown to marketable size. Enough clams are being produced for some to be placed back into natural reef areas.