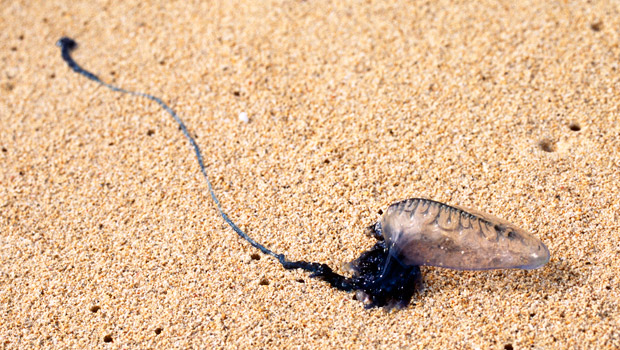 The Portuguese man-o’-war is a member of the neuston or “wind drift” community of organisms and generally lives far out to sea, floating on the ocean surface. It is a relative of the sea anemones and sea jellies (jellyfishes), a stinging animal that belongs to the grouping called the Phylum Cnidaria. The man-o’-war itself is not a jellyfish, but a colonial form related to the feathery hydroid colonies that are often seen growing on pier pilings.

Within the man-o’-war colony, one individual is modified into a gas sac (pneumatophore) which supports the colony and keeps it floating at the ocean surface. A ridge along the top of the sac acts like a sail, and the movement of the colony depends upon the wind and ocean currents. It is the sail that gives the man-o’-war its name, early explorers thought its shape resembled the helmets worn by Portuguese soldiers. Other members of the colony perform the tasks of food capture and feeding. The long, trailing tentacles (dactylozooids) are armed with stinging cells that contain nematocysts. Nematocysts inject a barbed thread and paralyzing toxin to capture and subdue prey like small fish. The tentacle transfers prey to the mouths of vase-shaped individuals (gastrozooids) that perform digestion. Nutrients from the meal are shared through a common gut system that connects all members of the colony. Communication between individuals is maintained through a network of nerve fibers.

Floating at the ocean surface, the soft body of the man-o’-war would seem an easy target for a variety of predators. But the man-o’-war’s translucent blue color makes it difficult to see against the background of open water, and the stinging cells in the tentacles are strong enough to repel most organisms. Specialized predators on the man-o’-war include sea slugs and snails that also float at the ocean surface. These animals are immune to the toxin of the stinging cells and can eat them along with the rest of the soft colony. Man-o’-war colonies that are blown onto local beaches are eaten by the sand-dwelling mole crabs and ghost crabs.

The life cycle of the Portuguese man-o’-war involves both sexual and asexual reproduction. A colony is started by a small swimming stage, called a larva, which is the product of the fusion of an egg and sperm from mature parent colonies. The larva produces a colony itself through a process called budding (asexual reproduction). The original individual divides and divides, producing more individuals, until the colony is formed. In a mature colony, specialized individuals (gonozooids) produce the eggs and sperm which will lead to more larval forms.

While the man-o’-war is too small to feed on humans, the stinging cells of the fishing tentacle can penetrate our skin and the toxin produces a painful sting. Strong winds or currents carry the man-o’-war onto Hawaiian beaches and the stinging cells can remain viable even after the colony is beached and dead, even dried specimens should be handled with care. If stung, swimmers, surfers, or beach goers should carefully remove the tentacles with tweezers or chopsticks and rinse the sting with salt or fresh water to remove any nematocysts, apply ice for pain control.