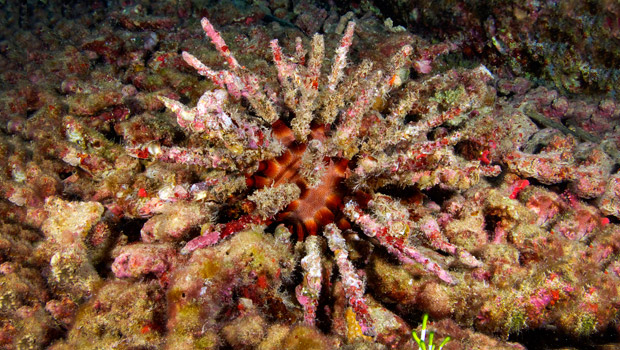 The rough-spined urchin belongs to the Family Cidaridae, a primitive group of urchins with large, blunt primary spines, ringed at their bases by smaller secondary spines. The spines of these urchins lack the living skin tissue present in other urchin species, and the primary spines usually become covered with a layer of algae, surface-dwelling invertebrates, and detritus.

The rough-spined urchin may reach an overall diameter of 8-10 inches: the test may be up to 4 inches across & the spines up to 6 inches long. The distinctive thorny spines are often covered with coralline algae and invertebrates including bryozoans, sponges and specialized snails, which lend additional color and camouflage. The spines are fairly sparse, and between them, the reddish-brown test of the urchin is visible. A ring of small, flattened spines can be seen around the base of each of the larger spines. None of the spines are reported to bear any venom, but they are thick and sturdy and likely help the animal wedge into the reef for protection.

Large specimens are occasionally found in the open, usually at depths greater than 30 feet (10 m). Small specimens are not uncommon in some areas but are well concealed under coral slabs or in crevices. This species is known only from Hawai‘i and New Caledonia. No specific Hawaiian name is known for this species.

Like most reef urchins, this species is an herbivore, grazing on the algal crusts that grow on reef surfaces.