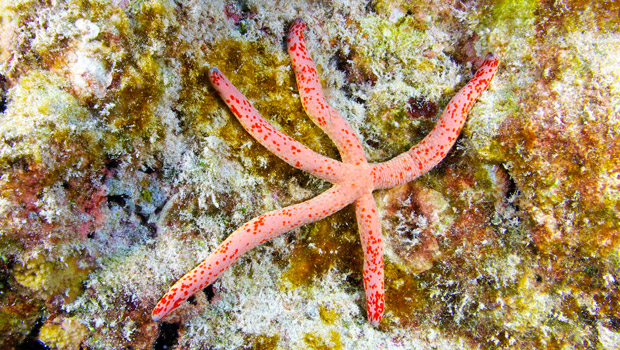 This slender-armed seastar is found in crevices on shallow reefs and under rocks on the reef flat. A detritus feeder, it picks up fine organic debris from the bottom. The small, weak tube feet that line the grooves on the undersides of the arms transfer food to the mouth in the center of the disc. Color is variable in Linckia, with reddish speckles on a background that may range from greenish or bluish-gray to red, purple, or tan. The scattered spots account for the alternate common name of “freckled” seastar.

Linckia seastars usually have five arms, but specimens with four, six, or even one are also found. This variability is a result of this species exceptional ability to regenerate damaged arms and/or to shed individual arms as a means of asexual reproduction. It is not unusual to find Linckia in all stages of arm replacement. Individuals with one long and four short arms are sometimes called “comets” because of their resemblance to a shooting star. While seastars are well known for their regenerative abilities, most need part of the central disc to survive. Linckia species are among just a few seastars that can regenerate an entire star from a single arm. Researchers suggest Linckia may absorb dissolved organic molecules, even without a complete digestive system, to fuel the regrowth of tissue.

Because Linckia is slow-moving and has weak tube feet, its predators may easily dislodge it from the bottom and feed on its tube feet and arms. Linckia may lose part or even whole arms to predators like the harlequin shrimp. Linckia may also be infected by parasitic snails which attach to or embed in the seastar’s arms and draw on the body fluids of their host.