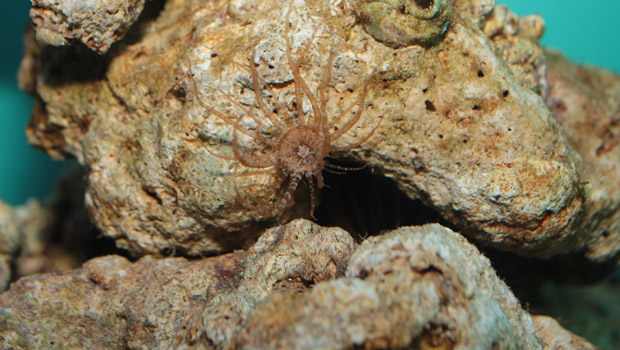 The Aiptasia or brown sea anemone is the most common Hawaiian sea anemone found on reefs and in tidepools. It is often overlooked because its color provides camouflage and because it can contract to a small size. This anemone is usually tan, but can range from pale green-brown to dark brown. The predominant brown color reflects the presence of symbiotic algae (zooxanthellae) which live within the cells of its gut. Anemones living in dark places are pale or even white because zooxanthellae are present only in low concentrations, or absent entirely.

White threads called acontia line the gut cavity and are visible through the body wall. Acontia bear stinging cells and are involved in digestion, but they can also be extended outside of the body (through pores in the body wall) if the anemone is disturbed and may serve a defense function.

In aquarium tanks, Aiptasia reproduce asexually by a process called pedal laceration – as the anemone crawls slowly with its muscular base, it leaves behind small bits of tissue that can regenerate an entire small anemone.