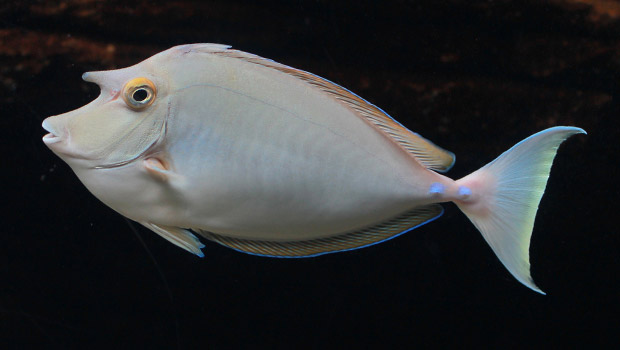 The unicornfishes – also called unicorn tangs – are named for the horn-like projection that extends from the forehead of the adults of some species. The function of the horn is not understood. Unicorn tangs belong to the surgeonfish family, Family Acanthuridae. All members of the family bear sharp blades at the base of their tails. The blades, located on either side of the caudal peduncle (tail base), are modified scales.

The blades are used both in defense from predators and to ward off competitors for a feeding area. Many surgeonfishes have just one retractable blade that fits into a slot on each side of the tail. In contrast, the unicornfishes have two fixed blades on each side of the tail. The double set of scalpel-sharp blades is one of the defining characteristics for genus Naso and is especially helpful for field identification because not every species develops the horn that gives the group its common name. The bluespine unicornfish or kala (Naso unicornis) develops the horn, for example, while the orangespine unicornfish or umauma-lei (N. lituratus) does not. As in these two species, the blades may be brightly colored and contrast with the rest of the body – possible a form of warning coloration.

Depending upon the species, unicornfish have a variety of feeding strategies ranging from grazing on filamentous and fleshy algae to picking tiny animals out of the water column. Each species’ diet tends to dictate where it will most commonly be found. The orangespine and bluespine unicornfish feed on bottom-dwelling algae and are often seen grazing on shallow reef surfaces. Adults of the plankton feeding species, like the paletail (N. brevirostris) and sleek unicornfish (N. hexacanthus), follow a more pelagic lifestyle and may be found beyond the reef at depths of as much as 700 feet.

Like most surgeonfishes, unicornfishes broadcast spawn in groups – females release eggs and males release sperm into the water where fertilization takes place. The clear larval stages develop in the plankton until they complete development and are carried close to reefs where they will take up life in the adult habitat.

Unicornfish were prized by the ancient Hawaiians both as food fish and for their tough skin, which was used for drumheads. The general name for the group, kala, means rough and is likely a reference to the skin. The strong odor of caught kala was said to be a result of the hero Punia killing some ghosts in a fish net. Kala are also associated in legend with the god Lonoikamakahiki. Someone who was skilled in self-defense was said to be “a kala fish with a sharp tail.”

The tail blades of unicornfish and other surgeonfish are capable of inflicting deep cuts. Though these fish are not generally aggressive toward humans, divers should avoid chasing or cornering them and fishermen must exercise caution when removing them from hooks and nets.