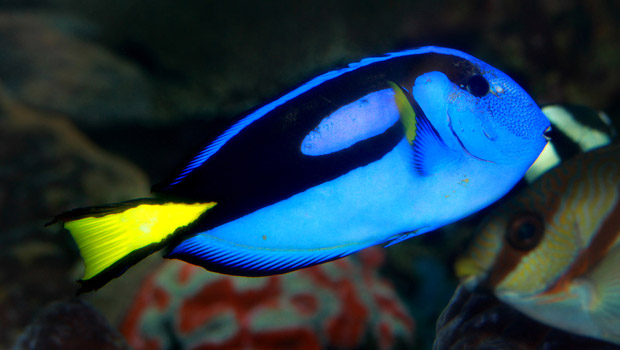 The surgeonfishes or tangs (Family Acanthuridae) include 72 species. All are found in marine habitats and are associated with coral reefs. Most surgeonfishes feed on algae, but a few species are specialized for zooplankton. As a group, surgeonfishes are named for the sharp blade-like, modified scales they bear on either side of the tail. The blades can be exposed by flexing the tail, and are used in competition and defense. Surgeonfishes can be seen moving through the water with wing-like beats of their front fins.

The blue tang is found throughout the Indo-Pacific, from the Great Barrier Reef to Japan, and Micronesia. However, its natural range does not extend to Hawai’i. The blue tang feeds on zooplankton above, current-swept seaward reefs to deeper waters, 5 to 115 feet (2 to 40 m) down the reef slope.

This brilliant blue surgeonfish can be easily distinguished from other members of its family because of its distinctive coloration. Large black markings on the back begin behind the eye and continue to the tail. This black band is broken up by an oval patch of blue. The tail is bright yellow with bold black lines on the top and bottom edges. Spines on all of the fins are venomous, sometimes leaving wounds on other fishes.

As with other surgeonfishes, broadcast spawning takes place above the reef and no parental care is provided. Eggs are small and transparent and are part of the plankton. Young palette surgeonfish spend part of their juvenile life among the protection of branching coral or in crevices of rocks.

Distribution
Indo-Pacific, not including Hawai’i