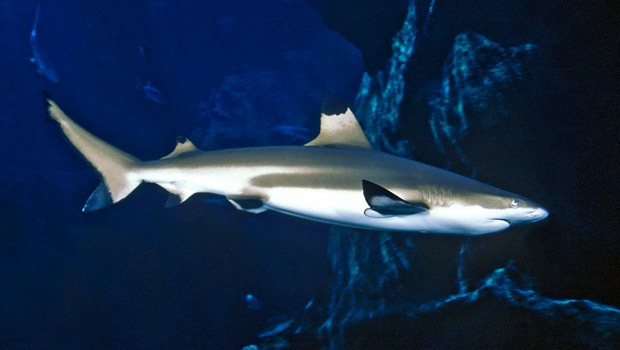 The blacktip reef shark is a common shallow water shark of the Indo-Pacific region and inhabits reef flats of islands and atolls from Hawai‘i to the Red Sea. Usually less than six feet in length, it is generally considered to be a relatively harmless species. In Hawaiian tradition, some families took this shark as their ‘aumakua, or family guardian spirit, feeding them and rarely killing them.

The blacktip reef shark is named for the distinctive black tips on its dorsal (back) and pectoral (side) fins. The darker back and pale belly is an example of countershading, a kind of camouflage that makes the shark harder to see when viewed either from above or below by predators or prey.

Like other sharks, the blacktip reef shark has a skeleton of flexible cartilage, reinforced with some mineral deposits. The scales, called denticles, are tooth-like in structure and very firmly embedded in the skin. Blacktip reef sharks must swim constantly with their mouths open, allowing oxygen-rich water to flow over the gills which are located in five separate slits on each side of the head. Since sharks don’t have a swim bladder like bony fishes, they will sink to the bottom if they stop swimming.

Blacktips feed on smaller reef fishes, as well as on octopus and crustaceans (crabs and lobsters). Their teeth are triangular with serrated edges. Because sharks’ teeth are only loosely attached to their jaws, they may lose or break teeth as they feed. But, special tissue in the jaws keeps making sets of teeth, and the new teeth automatically move forward to replace the older ones. The blacktip reef shark’s mouth is located on the underside of its head and the jaws fold up and out of the way when the shark is swimming, a design that contributes to their streamlining. When feeding, the jaws open downward and outward, protruding slightly to take in prey.

Like other sharks, the blacktip reef shark has internal fertilization. The male transfers sperm into the female’s reproductive tract using sperm-transfer structures called claspers. Female blacktip reef sharks retain two to four young within their body and nourish them via a placenta-like attachment. The young sharks are released at a size of 12 to 14 inches (30-36 cm); these “pups” look like miniature versions of the adults and begin feeding on their own in the protected reef shallows.

Blacktip reef sharks were once abundant on Hawaiian reefs, but are less frequently sighted now. The resident blacktip reef shark in the Aquarium’s Hunters on the Reef exhibit came from a pet shop in Los Angeles. Sometimes it is necessary to bring sharks from as far away as Palau, Micronesia, in the Western Pacific, over 5,000 miles (3,000 km) from Hawai‘i.