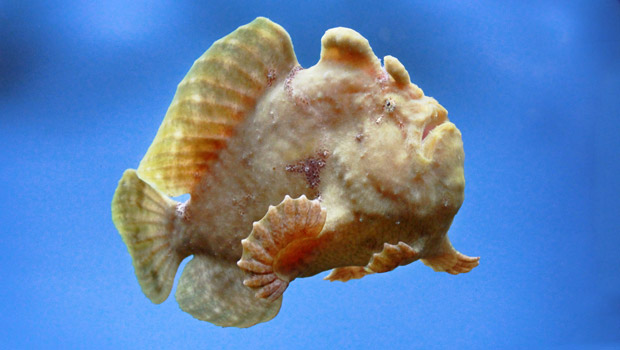 The frogfish is superbly adapted for its habit of ambushing prey. This fish’s head is comprised mostly of an upturned mouth, and small gill openings are set behind the pectoral (side) fin so that the outflow of exhaled water will not reveal the fish’s presence to potential prey. The frogfish braces itself into position on the seafloor using the stubbly, jointed pectoral and pelvic (forward) fins; the fish changes position by “walking” on these hand-like fins.

The coloration of frogfishes is highly variable. Black, red, orange, yellow, and mottled patterns have been observed in a single species. Some individuals look like brightly-colored Hawaiian sponges, right down to the fake “holes” patterned in the skin that resemble the excurrent openings of real sponges. Other frogfish may be brown and green like seaweed-covered rocks, and may even have real algae growing in their rough, scale-less skin.

Frogfishes are among the most specialized of ambush predators; their camouflage is so effective that biologists call it “aggressive mimicry”. These fish actually lure prey into ambush using a modified dorsal fin spine that acts like a “fishing pole” complete with fleshy lure. The frogfish flicks the lure over its mouth to attract small fishes. When a prey finds itself within reach, it is literally sucked into the frogfish’s cavernous mouth as the rapid expansion of the mouth cavity results in an inhalation of water. Frogfish can expand the mouth cavity to twelve times its normal resting volume within 6 to 10 milliseconds, making this one of the fastest capture mechanisms known in the animal kingdom. Because of this feeding method, frogfishes were once called anglerfishes but this name is now reserved for families of deep sea fishes that feed in much the same way.

In Hawai‘i, frogfish are found in quiet areas of the coral reef, and occasionally in shallow water on reef flats. There are estimated to be about ten frogfish species in Hawai‘i. Large specimens of the Commerson’s frogfish (Antennarius commerson) can reach one foot in length. Other smaller species may be no more than 2 inches (5 cm) long. One of these small frogfish species is known as the sargassum fish (Histrio histrio) has a pelagic lifestyle, inhabiting drifting mats of seaweed or other debris.

Distribution
world-wide, including Hawai‘i & the Indo-Pacific