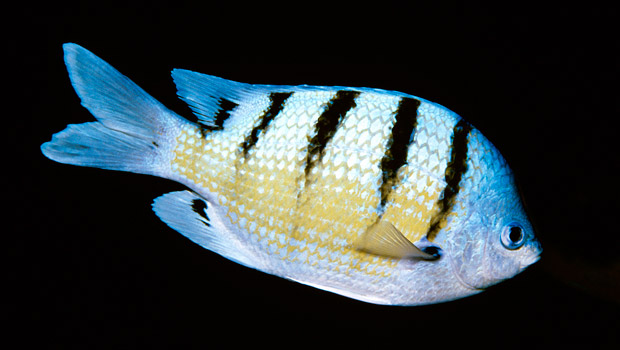 The Hawaiian sergeant major, also known as mamo in Hawaiian, is one of the most common damselfish species in Hawai‘i.

Juveniles of the species are common tidepool inhabitants. They are active and aggressive and will dominate other fishes in the pool. While living in the pools, the juveniles feed on algae and small organisms from the pool surfaces, as well as on plankton that is washed into the pool with the high tide. As they grow and mature, they move from the tidepools into deeper water of the surge channels, and eventually onto the reef face where they can reach sizes up to ten inches (25 cm).

Adult mamo are most numerous at depths of 16 to 33 feet (5-10 m), often where basalt boulders lie at the base of a vertical reef face. This species is well known because of its habit of stealing bait from fishermen’s hooks. During daylight, they hover in aggregations high in the water column above the reef where they pick organisms from the plankton. Larger individuals tend to be farther from the reef than smaller ones. As daylight wanes, these damsels descend to the reef so that by twilight, they are sheltered among the coral. Adults have a yellowish-green body with a light belly and five dark vertical bands on the sides of the body, the bands extend slightly more than half-way down the sides of the fish. Male mamo establish a nest site on a rock surface to which they attract females using courtship displays. When courting females or guarding nests, these males normally black bars become yellow, and they display by swimming in loops above the nest site. Multiple females may contribute eggs to the nest. The mamo is a Hawaiian endemic, found only in the Hawaiian Islands.