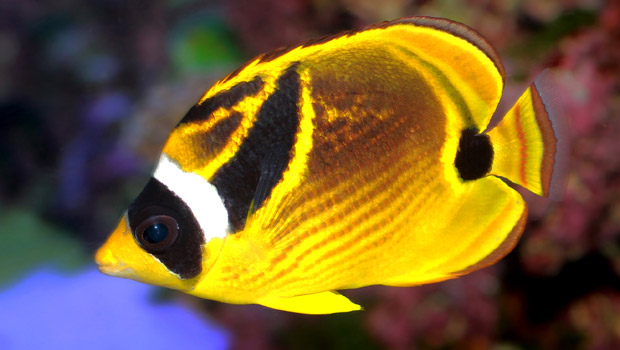 The raccoon butterflyfish, Chaetodon lunula, is one of the most recognized butterflyfishes in Hawaiian waters. It was named in English for the North American mammal that also has a black face mask. This fish’s Latin name means “crescent”, referring to the bold markings at head and tail. The Hawaiian name, kīkākapu, is shared with several species of butterflyfishes and suggests some sacred reference; like many butterflyfishes, it was not commonly eaten.

This species ranges throughout the Indo-Pacific, from the tropical coast of East Africa to Micronesia and Polynesia, north to southern Japan and south to Australia’s Lord Howe Island. It feeds on a wide variety of soft-bodied invertebrates including sea anemones, worms, nudibranchs, and occasionally coral polyps and algae. Familiar to snorkelers and divers, it is seen in pairs or aggregations on shallow reef flats and to depths of at least 75 feet (22.5 m). Some researchers report it as a night active species. The raccoon butterflyfish reaches lengths of 8 inches (20 cm).

Butterflyfishes are perhaps the most familiar of reef fishes. To many people, these colorful fish are synonymous with coral reefs — active and brilliantly colored. Most butterflyfishes are found in tropical, shallow waters, around coral reefs at depths of less than 60 feet (18 m). But, some newly-discovered species are restricted to deeper reef habitats, to 600 feet (180 m) or more. Roughly 123 species are currently known; 25 occur in Hawai‘i.